In 1813, the original jail in Doylestown was completed at the approximate cost of $38,000. Prior to this, the county prison was located in Newtown.

The jail erected in 1813 was used for 70 years until the Grand Jury in 1882 declared the building unfit, suggesting construction of a new building.

In 1885, the Bucks County Prison was completed with an adjacent stable at the cost of $85,000. The physical structure remained the same from 1885 until it was modified and a county Library was built on site. The wall surrounding the prison was completed in the 1930's as part of the WPA.

In 1980, approval was given by the County Commissioners to build a new correctional facility to replace the outdated Bucks County Prison. The Bucks County Correctional Facility opened for occupancy on June 18, 1985. 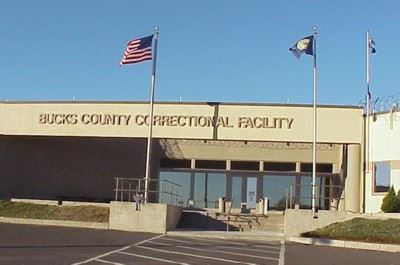 This facility serves as the countywide central receiving location for all persons committed to the system as either pre-trial detainees or convicted prisoners. Annually, the facility receives over 7432 prisoners. Medium and maximum-security classified inmates are housed at this facility.

This facility has 10 modular living units utilizing a direct supervision philosophy while providing programs for the treatment and education of the inmate population. There are 712 bunks available to house inmates.

The facility was designed and built to be operated using a direct supervision philosophy. This methodology has corrections officers in direct contact and observation with the inmates throughout the facility.

Good security is the backbone of any correctional facility. Corrections Officers monitor inmates 24 hours a day, 365 days a year. Daily supervision by officers, sergeants and lieutenants assure that the security and safety needs are met and that the operational plan of the day is followed.

The security staff supervises an average of 727 inmates each day.

The Inmate Services section is responsible for providing or coordinating the following services:

Volunteers from the community provide numerous hours of service to the inmate population through one-on-one counseling, educational tutoring and life skills development. The department is thankful to all volunteers who give freely of their time and efforts.