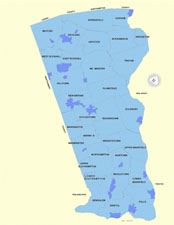 Reasons to have a Bucks County Department of Health HIV/AIDS Presentation:

Getting the Message to

People under age 25 years are estimated to make up at least half of all new HIV infections occurring in the United States. HIV has been the leading cause of death among young people since 1991. Yet, large numbers of infected young people have never been tested and are unaware of their status. The impact is most acutely felt among young men who have sex with men (of all races, but especially young African-American and Latino men), and among heterosexual young men and women of color.

Teen and young adults receive their information from many resources. School and parents rank highest but the media is also a powerful informational tool.

Most young people in the United States are aware of the basic facts about HIV transmission and prevention. However, many are unwilling to face their own personal risk or seek out HIV testing.

While people have historically viewed HIV/AIDS as a largely male problem, the disease is having a significant and growing impact on women in the United States. Today women account for more than a quarter of annually diagnosed cases of AIDS in the United States, and an even higher proportion of new HIV infections. African-American and Latino women account for 78% of AIDS diagnoses reported to date among women in the U.S.

The lack of awareness of women's risk of HIV infection (even among health care providers) all too often means that women are tested and diagnosed later in their infection. Many women are infected by male partners without having any awareness of being at risk of infection, and are often unlikely to seek testing until symptoms appear. This can result in missed opportunities for care and treatment earlier in infection and, potentially resulting in premature disease and death. Many other women are tested during pregnancy, often with limited counseling or information.

The HIV/AIDS epidemic continues to grow with frighteningly high rates of infection in the African American community. AIDS death rates remain nearly 10 times higher among African Americans than among Whites. African-Americans constitute approximately 12% of U.S. population, yet represent 38% of all reported cases of AIDS. Nearly half (47%) of the newly reported AIDS cases in 2000 (the last year data is available) were among African-Americans. Among women with AIDS, nearly two-thirds (64%) are African American.

The African-American community is diverse, and the epidemic touches many groups within it, including African-American men who have sex with men, people who use drugs, heterosexual women and men, immigrants from Africa and the Caribbean, young people of all sexual orientations and risk profiles, and others. There is no single approach which will effectively reach all of these groups; efforts must look at the specific needs of the diverse parts of this population.

The Census Bureau reports that Latinos, as of early 2003, are now the largest racial/ethnic minority in the country. Far from being a monolithic population, Latinos represent a variety of ethnic, social, economic and cultural backgrounds, and include people of all sexual orientations and risk factors. The Latino population includes large number of both those born in the U.S. (many with family roots going back hundreds of years) and immigrants to this country. Although Latinos represent approximately 13% of the total population, they account for 18% of all AIDS cases that are reported by the Centers for Disease Control and Prevention. As a group, the Latino population in the U.S. is younger than the general U.S. population and research shows that younger Latinos are at a particularly high risk for infection compared to whites.

HIV studies of the Latino population show that views about HIV/AIDS vary significantly by income, education, language, culture and age. The same surveys show that Latinos need and want more education about a range of HIV-related issues including information about how to talk to their doctor, children and partner about HIV/AIDS.

Men Who Have Sex with Men

Since the first reported cases in 1981, HIV/AIDS has severely and disproportionately impacted the community of men who have sex with men (including gay, bisexual and non-gay identifying men who have sex with other men). Despite significant declines in HIV infection rates since the early years of the epidemic, this population continues t represent the largest number of new infection cases, accounting for more than 42% of new HIV infections reported in the U.S.

While the public perception of MSM is often that they are "white, middle class, college-educated and urban," the reality is that MSM include men of all races, ages, linguistic, socio-economic and geographic categories. When developing outreach programs, it is essential to be aware of the need for culturally-appropriate approaches for different elements of this very diverse population. In particular, African-American MSM constitute an alarmingly and rapidly rising number of new infections, and efforts to reach African-American men, especially younger men, are urgent.